Showing posts with the label goal setting
Show all

- December 31, 2014
New Years is the that special day where people boastfully pronounce their resolutions to any passerby who will listen. Like most New Year's resolutions they are short lived and die off in a few short weeks after pronouncement. This year, instead of making resolutions, look to bring in the new year with some well thought out goals. This will help you give your life a kick in the pants as you march down a brighter path. Goals are different than resolutions. Resolutions usually seek to solve a problem and are not always well thought out. This is one reason why resolutions don't often have staying power. Goals are a commitment to achieve some objective and require greater thought and action to successfully achieve. A popular New Year's resolution is to work out and get into shape. With no real plan in place you walk into your closest gym and sign up for that expensive gym membership that will continue to charge you even though you don't go anymore. You also buy yourself
Post a Comment
Read more 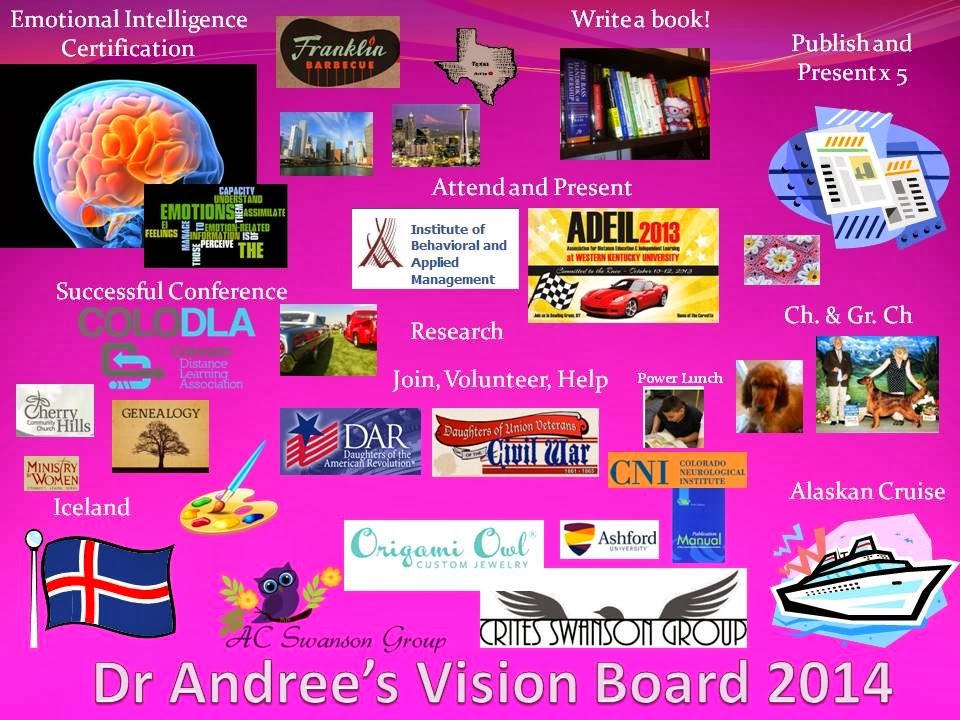 By Dr Andree Swanson Another new year and guess what I received in the mail?  Jenny Craig, Weight Watchers, 24-hour Fitness and a whole slew of advertisements that weigh in on (no pun intended) those people who believe in the power of the New Year’s Resolution.  While surfing Facebook, a family member posted that she had to park a mile away from the gym.  In a month, parking will return to normal. To affect change, you must change your behavior.  Norcross, Ratzin, and Payne (1989) conducted a study on 213 adults who made New Year’s resolutions.  “Successful resolvers were also found to report employing significantly more behavioral strategies and less self-blame and wishful thinking than unsuccessful resolvers” (Norcross, Ratzin, & Payne, 1989, Abstract). Consider creating a vision board, instead of making New Year’s resolutions.  This is not only fun to make, but can be a constant reminder of your focus for the year.  (I used to do this on a large post-it note
Post a Comment
Read more

- January 26, 2013
Goal Setting: A Motivational Technique that Works! by Edwin Locke and Gary Latham discusses in great detail the nature of employee goal setting and how this can improve performance within organizations. The book elaborates on how to set goals in a manner as to produce motivation, implement goals within organizations, and how to design goals that further corporate strategies. It discusses how goal setting has become supported by science as a plausible method of developing higher forms of activity within organizations. Such concepts as laboratory testing as well as real world validity have been assessed to lend credibility to the overall work. Through these studies the advantages of goal setting include productivity, performance, clear expectations, thwarting of boredom, task satisfaction, performance satisfaction, recognition options, competition, and self-confidence. There is also some practical advice on how to set goals. The book suggests: 1.) Specify the general objective or
Post a Comment
Read more

Goal Setting and Motivated Behavior in the Workplace

- January 11, 2013
Goal directed behavior exists within the motivational aspirations of the employee. Nearly all behavior is seen as having some goal or objective that is striving to be fulfilled. Focused goal directed behavior is not driven by environmental conditioning or instinct alone (Locke, 1997). Such behavior must be made through the free choice of options and turned from thoughts into actions. It has a specific goal outcome that employee hopes to achieve by putting forth the energy into a strategy that finally reaches its desired outcome. Employees will set all types of goals throughout their entire spectrum of influence. Management's job is to help employees ensure that those goals that pertain to the workplace are appropriate for both the employer and employee. Through such directed goals organizations can seek higher levels of alignment between employee actions and organizational needs. True alignment exists when the totality of employee goals further foster the strategic objectives of
Post a Comment
Read more
More posts