Showing posts with the label subconscous
Show all 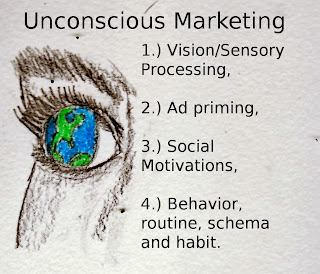 Subconscious goals = how we see the world. As competition between products and services rises, marketers seek new methods of promoting products beyond the cultural borders that often limit sales potential. The paper by Woodside and Brasel (2011) provides an overview of unconscious branding as well as its four major methodological approaches.  Understanding what researchers have already found and where large gaps in the literature exists help in highlighting the need for additional research. Unconscious marketing deals greatly with the concept of behavior, action and beliefs (BAB) toward products. At its core is the belief that behavior proceeds action, which in term fosters particular beliefs in products ( Wilson, 2002). Thus, most thinking is on an unconscious level and behavior typically occurs before conscious thinking. If so, marketing can be effective at an unconscious level. To understand the unconscious it is often beneficial to see an example in ancient history. W
Post a Comment
Read more
More posts