Showing posts with the label phantom of the opera
Show all 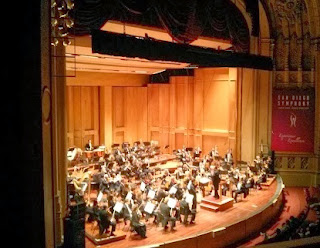 On October 4 th , 5 th , and 6 th the San Diego Symphony hosted Jacobs Masterworks 13-14 with a special performance by violinist Augustin Hadelich. Beautifully directed by Jahja Ling the overall performance was full of exciting peaks and valleys that kept the audience in suspense. As the Barber Violin Concerto blazed through pieces at a lightning pace one could almost see the sparks fly in a crazed display of artistic fury. Director Jahja Ling is originally of Chinese descent but has migrated to the U.S. His experience is broad and he has received acclaim in Europe and America. Much time was spent being a guest conductor at a large range of different locations and places. At present he is settled in the San Diego Symphony and is drawing large crowds. You may listen to his numerous recordings on his official page HERE  Violinist Augustin Hadelich was born of German descent in Italy. His family has a long history in music. A family fire burned a great portion of his uppe
Post a Comment
Read more
More posts