Showing posts with the label parts
Show all 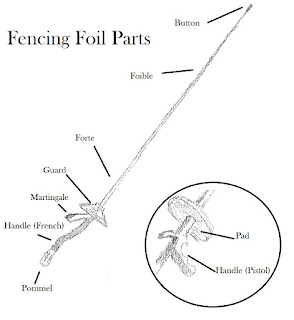 Fencing has been part of society since the 12 th century and made its way from the original Greek Olympics to modern Olympics.   The foil is the most common fencing sword in the sport and is generally the first to be learned. Learning foil offers the development of basic style, skill, and game mechanics that are unlikely to come from saber or epee. Knowing the parts of the foil is important for grasping how it becomes an extension of one’s body. The foil is made of light steel between 350g and 500g. The length cannot be longer than 90cm. I have both a 350g and a 500g blade ( 1 ). There are significant differences in the weight and strength. At 500g your movement is likely to be mooted as the weight slows down a quick reaction. It does afford the ability to overpower your opponent in parry and riposte but you are unlikely to be nimble enough to counter a skilled opponent’s moves. Furthermore, a heavy blade will fatigue your arms in long bouts and give your opponent an advanta
Post a Comment
Read more
More posts