Showing posts with the label merchant painting
Show all

Economic Art as Represented in The Merchant Georg Gisze 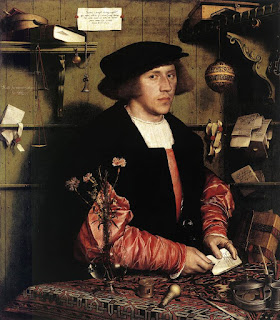 The Merchant Georg Gisze 1532 The painting entitled The Merchant Georg Gisze, or Der Kaufmann Georg Gisz, depicts a wealthy Steelyard merchant on the North bank of the Thames in London. The Steelyard merchants banned together in order to avoid the power of the princes, pirates, losses in shipping, and other factors that often impact the success of economic gain during this time period. When the artist Hans Holbein finished the work for Georg Gisze in 1532 he was unlikely to be aware that his work would be part of the pantheon of masterpieces. The Merchants of the Steelyard (der Strahlhof) were first known as the Hanseatic League at their establishment in London Knotor of the year 1320. Eventually they developed their own walled community with a church, warehouse, guards, offices and houses. The league was a defensive pack of guilds, connected to other economic outposts, that protected their trade on the Baltic and North Sea. At this time in history the world was a very dangerou
Post a Comment
Read more
More posts