Showing posts with the label medici
Show all

The Battle of San Romano by Paolo Uccello 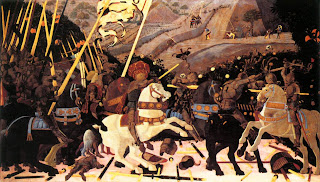 The Battle of San Romano-Paolo Ucello The Battle of San Romano by Paolo Uccello depicts the historic battle of 1432 between Florence and Siena.  Within the work one can see the Sienese ambushing the Florentine commander Niccolo da Tolentino. Despite being outnumbered the Florentine army was able to maintain the battle for around eight hours before being subdued.  Niccolo was a condottiere (professional mercenary) and a close confident of the House of Medici.  It is also possible to identify Niccolo by the red headdress and the Knot of Solomon on the banner.  The red headdress is designed to keep the viewer focused on the hero of the painting while allowing for better perspective of the battle. Broken lances on the ground are an indication of repeated battle and charges.  Solomon’s knot is of significance in this artwork. Looking closely at the banner one is able to find this knot that is rightfully called the Seal of Solomon. Christians, Muslims, and Jews all claim a
Post a Comment
Read more
More posts