Showing posts with the label equity theory
Show all 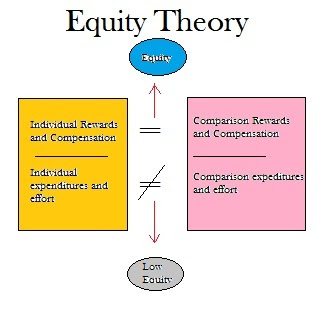 Equity Theory is a concept developed by the Behavioral Scientist John Stacy Adams in 1963.His theory indicates that people will judge and analyze both the rewards and the outputs of effort to determine whether not they are being treated fairly within the workplace (Adams, 1965). These inputs and expenditures are subjective by nature as they are based upon the perceived rewards and efforts of others. When information is accurate employees are better able to accurately gauge the equity relationships with employers and produce more meaningful results. An example can help in solidifying this concept. Let us say for a moment that John and Sally work for the same company. John works very hard each and every day but doesn’t seem to be getting anywhere at work. When he looks at Sally he believes that she works less but has received two raises within the past few years. He also notices that Sally is very friendly with her bosses and he interprets such actions rightly or wrongly as flirtati
Post a Comment
Read more

The Leading Theories of Employee Motivation

- January 07, 2013
Job motivation spawns from a variety of employee interests and desires. Motivation comes from the personal desires of the individual but is fostered through organizational pathways. There are many different ways of defining motivation but often motivation includes all reasons why a person chooses to act in a certain manner (Adair, 2006). The most common theories offer some level of insight into motivational factors that lead to higher levels of performance. It is often beneficial to view these various common motivational theories to see a wider picture of the running vantage points and approaches to understanding employees behavior. Each motivational theory has their own particular approach that ranges from group dynamics to fulfillment of lifelong needs. Some are psychological by nature while others look at the organization and its environment as factors. Maslow Hierarchy of Needs: Through this theory the needs of individuals progress through different stages based upon their dev
Post a Comment
Read more
More posts