Showing posts with the label Jahja Ling
Show all 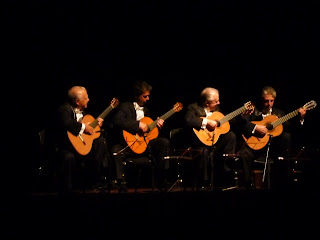 The San Diego Symphony presents The Romeros: Royal Family of Guitar from May 16 th to May 19 th , 2013. The Romero Quartet started in the 1960 based upon the idea of the father Celedonio Romero and his sons. After the group’s father passed away in 1996 he was replaced by his grandson to keep the family tradition alive.  The Romeros are a beautiful example of classical guitar that provides sweet sensation to the ears. You almost feel as though you are in Spain. Tapas anyone? The Romeros are also known as The Royal Family of Guitar as their music delves into traditional Spanish style of strings. The New York Times states their opinion of the classical guitar group as "Collectively, they are the only classical guitar quartet of real stature in the world today; in fact, they virtually invented the format." They have traveled the world and sold out a great many performances.  Admirers include thousands of people ranging from Ed Sullivan to Pope John Paul II. JahJa Lin
Post a Comment
Read more
More posts