Showing posts with the label Hun
Show all

The Arrival of the Pilgrims in Cologne by Vittore Carpaccio 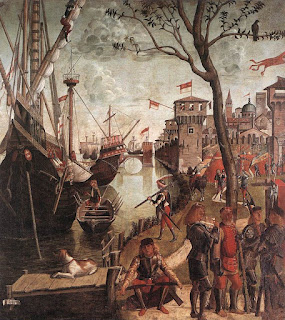 The Arrival of the Pilgrims in Cologne The painting The Arrival of the Pilgrims in Cologne is the seventh painting in the series of Stories from the Legend of St. Ursula. In the painting, you can see one of the ships docked while the other ships of the retinue are still waiting in the bay. You can also see Ursula and Pope Cyriacus and leaning over the ship asking questions of the boatman. Armed guards and lots of activity make their appearance in this busy port. The painter Vittore Carpaccio was born in Venice to a leather merchant. Not much is known about his life other than he painted a number of great works. The Legend of St. Ursula is one of his best works that depicts a story. Each painting marked a particular place and scene in the legend. These types of series paintings would require a number of years of study and research. The paintings depict Ursula who was a 5 th century daughter of an English King. According to the legend, a Hun king asked for the hand of Ursu
Post a Comment
Read more
More posts