I was reading the article "Great American Outdoors Act Would Improve National Parks—and U.S. Economy" by Marcia Argust from the The Pew Charitable Trusts’ campaign to restore America’s parks and it sparked my interesting. The Act introduced by Senator Cory Gardner states
, "investing nontaxpayer dollars to fix deteriorating assets within our aging National Park System (NPS) " Such investment may have some impact on the Delta County area and its natural resources through the improvement of resources and in turn tourism. We can do a better job capitalizing on the growing trend of eco-tourism and its related industries.

Like the author I believe there is a link between investing in our natural assets and improving our economies. There is a wider benefit that could be utilized to help places like Escanaba/Gladstone and the rest of Delta County Michigan not only improve their economies but also protect healthy U.P. environments that are increasingly becoming national treasures. We can do more with the right economic plan in place.

The has a couple of interesting points (quoted from the article).....

There is no doubt that this fund will have an impact on some local economies. There are other benefits that are not calculated in these figures that include impact on eco-tourism and related industries for rural locations like Delta County Michigan.

You can read about the Act in Congress HERE.

The fund has the following criteria.....

“(a) Establishment.—There is established in the Treasury of the United States a fund to be known as the ‘National Parks and Public Land Legacy Restoration Fund’.

“(1) IN GENERAL.—Except as provided in paragraph (2), for each of fiscal years 2021 through 2025, there shall be deposited in the Fund an amount equal to 50 percent of all energy development revenues due and payable to the United States from oil, gas, coal, or alternative or renewable energy development on Federal land and water credited, covered, or deposited as miscellaneous receipts under Federal law in the preceding fiscal year.

Let us take a look at how some of the funds will be used. That will give us a better ideas of where and how that might impact the local area.

“(1) IN GENERAL.—Amounts deposited in the Fund for each fiscal year shall be used for priority deferred maintenance projects in the System, in the National Wildlife Refuge System, on public land administered by the Bureau of Land Management, for the Bureau of Indian Education schools, and in the National Forest System, as follows:

“(A) 70 percent of the amounts deposited in the Fund for each fiscal year shall be allocated to the Service.


“(B) 15 percent of the amounts deposited in the Fund for each fiscal year shall be allocated to the Forest Service.


“(C) 5 percent of the amounts deposited in the Fund for each fiscal year shall be allocated to the United States Fish and Wildlife Service.


“(D) 5 percent of the amounts deposited in the Fund for each fiscal year shall be allocated to the Bureau of Land Management.

“(E) 5 percent of the amounts deposited in the Fund for each fiscal year shall be allocated to the Bureau of Indian Education.

That means there may be money being spent on some of our local resources that would in turn improve tourism and create a stronger environment for other eco-tourist industries. You may want to see an article I wrote on Attracting SME Adventure-Venture Capitalism to Delta County (Escanaba & Gladstone) Through Neuroeconomics to gain a greater understanding of how this might work.  I'm not sure if there is a plan out there yet that determines who gets what but it will be interesting to see what the budget will look like.

If you look at the map below you will find that Delta County Michigan exists and lives in nature. Its major industry is mining, small business and the paper mill. Local officials sometimes dabble with tourism but haven't diversified their industry to protect its local population and jobs from changes in the global market. Much has to do with creating the right plan and drawing in interested stakeholders.

Escanaba and Gladstone have opportunities to develop and grow micro-manufacturing of recreational tourist products, draw in tourism and develop a distribution base for a new push into manufacturing. By developing the right clusters they will eventually find industry grow and develop exponentially as these industry take hold. Such industries are likely to fit within local skills and abilities which can be beneficial for developing clusters.

Development requires a commitment to using the areas resources wisely. It is important to remember that nothing stays the same forever. It must change and adjust or it must die and become another town with a decaying downtown and few opportunities. Escanaba and Delta County have a solid base and with the right investment and capitalization on resources it can return to a growth stage while keeping the outdoor flavor intact. 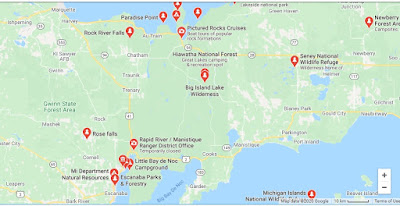 Thus far the Senate passed the legislation in June on a bi-partisan vote 73 to 25. I say I support this Act.