Sailing Hot Rum Races with Fitness Gloves-Did they hold up? 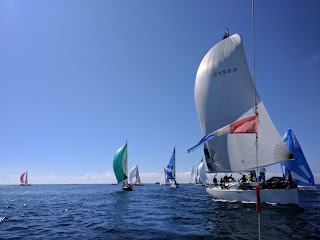 You wouldn't believe me if I told you I tried out a pair of fitness gloves that I used for lifting at the gym during a heated Hot Rum Races on November 4th. Over 133 boats participated and San Diego Bay was packed. Having the right equipment is important but knowing what works and what doesn't can make a big difference.

I have these gloves and I was trying them out for new uses to see if they hold up against significant abuse. It just happened that one of our teammates forgot her gloves so I offered my leather pair to her and used the gloves I bike over with. Because I wasn't sure of how well the gloves would hold up if you are a "grinder" the deal was I would get them back if I need them.

If you are running the Jib sheet you will soon find that leather gloves slip and get worn out quickly. When the wind blows you need to pull with significant strength on the jib lines. Gloves slip which require ever more levels of effort to not only pull and grind the sheet in but also to hold onto the line so it doesn't slide back out. 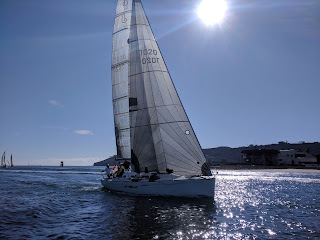 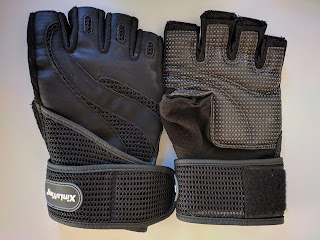 The same can be said with the spinnaker and the need to chronically adjust the lines so it doesn't collapse with wind changes. Without having strong gloves that can grip the line it is possible to make mistakes and shave off seconds that lose race. In this particular battle, we even overpowered the boat and had to let the line out in a controlled manner so we don't "wind up".

What I found out is that these "fitness" gloves worked better than the standard leather sailing gloves you pay $30 or more for. There was almost no slip and they didn't have a single market on them. Stitching was solid and the microfiber held well after 5 hours of hard core rope gripping.

1.) Durability: They lasted significant abuse after gripping the rope and grinding the jib and spinnaker sheets.