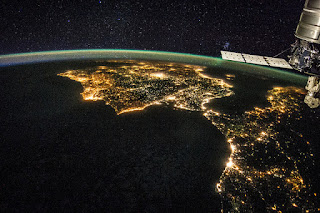 The world economy consists of millions of large and small networks that span from one country to the next. Ports-of entry and exit are key determinants of product flow and economic strength. The same process works in reverse for ports-of-exit. The strength of a nation's supply networks, and its position within the global supply chain, helps determine its ability to growth economically through the movement of products and goods.

Ports, railroads, airports, and highways influence economic growth potential as products find their way in and out of the country through the most efficient and cost effective pathways they can. Connectivity in the world-system increases spatial polarization toward global cities in a way their favors economic activities (Friedmann, 1986). Better connections attract more traffic that in turn increases business opportunities.

Cities that have placed themselves strategically, or by good fortune were geographically located in an advantageous locations such as rivers and trade routes, have historically found themselves more wealthy and more cosmopolitan centers of innovation and development. The principles that have applied in the past continue to apply today in a way that influences the wealth and viability of nations.

Globally oriented cities think of their ports, airports, highways and railroads as an important pieces of the puzzle of becoming a global shipping center. Investment in these areas leads to greater economic growth when significant internal industrial and business networks have been fully developed. Networks reach to other major shipping networks and centers that connect international economies together.

China found that after they invested in the development of their ports they also realized significant economic growth throughout the region (Song & Geenhuizen, 2014). These infrastructure investments had spill-had effects that reached into various areas of the country. Increased import and export activity opened new opportunities for regional businesses that further justified increased investments.

Think of the world as a round sphere of railroads, highways, shipping lanes, and air traffic routes.

Connecting a city to global networks does take some analysis. Such cities should have a solid manufacturing and technology base to improve and convert incoming and outgoing products. Investments in shipping infrastructure should be based on the needs of the international market and the capacity of the cities current position within existing global supply networks. Likewise, constant development of internal networks is necessary for value building for distribution to markets.

Permission to use with appropriate attribution-Dr. Murad Abel