The Economic Development of Platforms in History 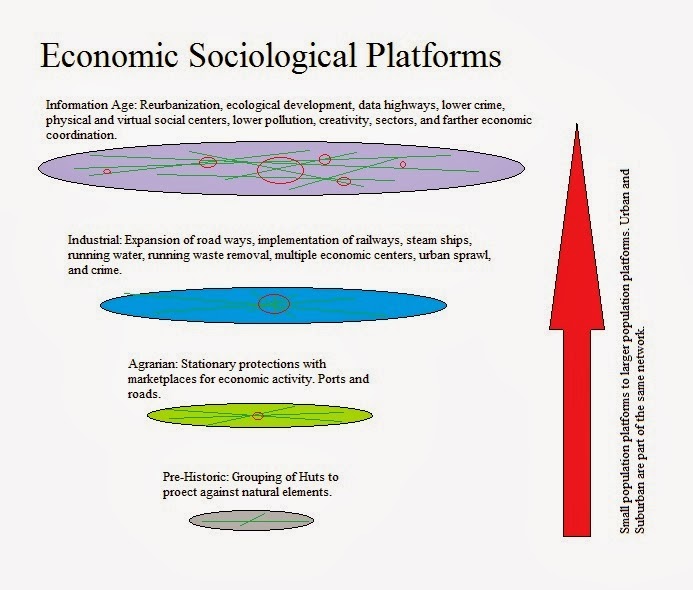 It can sometimes be fun to think of where society is heading. Perhaps it is more wishful thinking than concrete concept but there is often a little bit of science behind projections. If we look at the trends of data development, global warming, and global business trajectories we may find that pressures will create impetus to redevelop the declining urban cores into something more economically and ecologically sustainable. Decision-makers are seeking opportunities to raise economic activity and lower costs while reducing pollution. The next economic platform will be based in the varying pressures of the environment in which it develops.

Economic platforms often mirror city planning through the design and development of a city’s infrastructure. City planning is something that has existed before the Roman Empire all the way back to Plato’s Republic. Europe is full of cities that once started off of the Roman designs and continued to develop beyond these platforms to create mazes of unique chaotic charm. This is one reason why you can find narrow streets mixed with eclectic shopping districts. The American system is newer and may be in the process of transformation.

Each platform is related to the economic and social needs of the people. In ancient history, early settlements focused on protecting individuals from nature’s elements and predators.  As people moved away from simple hunting- gathering societies and into agrarian existence they naturally sought marketplaces where they could sell their items and seek protection from invading groups. Most cities were located in agricultural land, near waterways, or nestled in easily protected areas.

Eventually cities moved beyond agriculture to include the production of cottage industry goods and industrialization. It was these cottage industries that grew into the mega-corporations of today. This required expansion of slim roadways previously designed for horse and buggy to those that could handle larger vehicles and goods. Airports, railways, industrial complexes, and skyscrapers became part of the mainstream. Those who did not like the industrial core moved out to the suburbs creating economic hubs around cities. The dirty and polluted urban core was abandoned by those who had access to wealth.

The next development of economic platform is not so easily defined and is open to considerable debate. There is greater opportunity to develop the high data and eco-city that reduces its carbon footprint while increasing the economic capacities of its habitants. Old skyscrapers will be rejuvenated, new technology implemented, and suburbs will be drawn back into the city through civic, resource and data connectivity. Sprawl will decline as resources move inward back to their urban centers where strong infrastructure investment can be pointed.

The eco-city will be designed as an economic hub that uses existing rail and roads with new data systems to create higher connectivity between various components. Wi-Fi, fiber optic cables, mini parks, creative spaces, coffee shops and other improvements will match to larger industrial sectors to interconnect economic activity and development.  A good idea can come from anywhere and businesses will capitalize on them.

As a nation, we were once worried about exploiting our natural resources. We are now more concerned about competing on an international market and will need to match creativity with practical production to develop better products and services. This cannot happen unless the infrastructure of a city encourages creative activity, proper social relationships, and economic advancement. Such economic centers will connect to other areas to draw in physical and virtual resources for development.

The Information Age is marked more by the rapid and proper use of data streaming into the powerful hands of the individual user. Each person will be more connected to the system and able to control their education, time, economic opportunities, and development. Cities will be better managed with higher levels of interactivity that allow people to work virtually with much less energy. Economic strength will be enhanced through collective effort.

These systems are based on the ability to provide the platforms needed for economic and ecological growth. Today’s businesses are more information oriented than in the past and use physical resources at a much more efficient pace.  Maximum development will require the connection of the individual to worldwide economic activity through small shop and large organizational pathways. The individual within the larger economic structure will take precedence through greater development of the virtual organization. Education and training will be on the top of the list for human capacity development while greater balance between small and large business will be sought to ensure pipelines of innovative ideas.