Showing posts with the label pension fund research
Show all 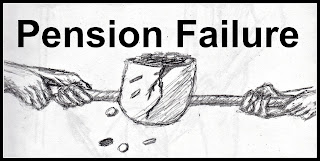 Pensions are a primary source of retirement savings throughout the nation. Poor management decisions, recessions, and cronyism have depleted these funds to a point where they now become a significant risk, not only to those who rely on them, but to the local economy as well. Chicago recently became aware of the devastation of their policies when faced with a pension budget shortfall of $6 billion that neither they or the State of Illinois can afford. Difficult choices will need to be made that will likely upend entire networks of people and companies that need and profited off these pensions. The problem with pensions is that when they go South there are few win-win situations, and reform comes with a significant cost; especially to those of older age. The cost either falls on the states, on employees, or on the national economy. As the risk of multiple pension implosion rises at a time when national debt is high, the Great Recession is coming to a close, and international strife i
Post a Comment
Read more
More posts