Showing posts with the label peasant life
Show all 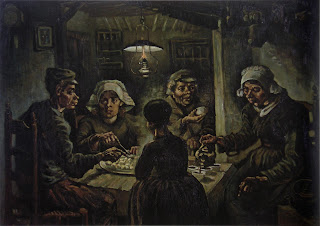 The Potato Eaters-1885 The Potato Eaters presents five figures of which three are females and two are males. One of which appears to be younger than the others and standing before her family. The meal is simple consisting of baked potatoes without any type of dressing. Spices were expensive and imported from other areas.  This meal was a regular staple for people who did not have the access to the refrigerated varieties we have today. The other woman is serving coffee for the group through cheap cups and a pot. You can see the conversation within the picture as the family discusses their daily happenings. One might be talking about the hens and the other about the saving of seeds. Their lives consumed them and filled up their conversational needs. It was all about survival. The colors are dark which gives the painting a dark and dirty look. On the ceiling is a single hanging lamp that brightens the families faces. Even though each female is wearing drab clothing and a b
Post a Comment
Read more
More posts