Showing posts with the label peasant art
Show all

Art: The Peasant Dance by Pieter Bruegel the Elder 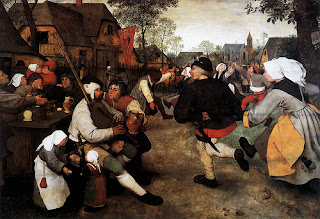 The Peasant Dance by Pieter Bruegel the Elder is a depiction of the peasant life in the late 1500’s. He was particularly interested in how they lived, dated, married, ate, dressed and relaxed. It was a life that fascinated him but also was part of his very core existence. To Bruegel it was a simple life that focused on the day’s happenings and seemed a natural existence connected to nature.  The scene is lively and the painter is well known for his humanist pictures. The people within the painting are larger than life which appears to embolden their lives. Bruegel seems to be trying to make distance from himself and his peasant background by painting the figures oafish by nature.   He moved his way up the social ladder and continued to be fascinated by the way the peasants lived due to his deep connection with them.  The painting shows a Madonna on the tree that appears to be ignored as the peasants engage in their fun. The life of the present, now, and materialism has ma
Post a Comment
Read more
More posts