Showing posts with the label paul glimcher
Show all

Book Review: Decisions, Uncertainty, and the Brain-The Science of Neuroeconomics 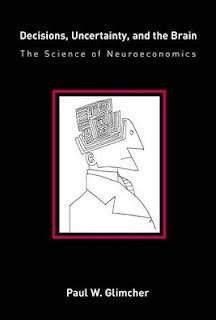 The book Decisions, Uncertainty, and the Brain: The Science of Neuroeconomics by Paul Glimcher attempts to outline the new science of neuroeconomics. As a new science it is suffering from a lack of theory to build a comprehensive association that fits the truckloads of data that have been pulled from both psychology and economics. At the very core of the science rests the neurological functions of the brain and how they impact theory.  The book provides strong details on stimulus-response based within reflexology. Furthermore, the work provides some historical discussion on the simple and complex behavior proposed by Rene Descartes and some of the philosophers that have led o the modern field of neuroeconomics. The book also discusses the concepts of survival of the fittest, reflexology, probability, game theory, brain games, economics and the resulting philosophical implications. The later part of the work is more devoted to the ill defined theory of neuroeconomics. The
Post a Comment
Read more
More posts