Showing posts with the label oil painting
Show all 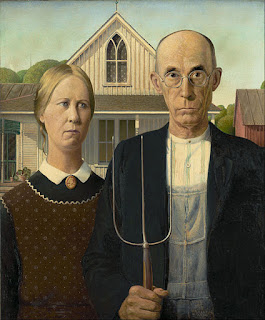 American Gothic (1930) The painting an American Gothic was produced by Grant Wood in 1930. It was completed in Iowa as a backlash against Europeans trying to depict Americans from their own vantage point. The concept of self-representation was called Regionalism. It was part of a movement of paintings by Americans to characterize "true" American life. The picture is of a farmer and his daughter. Grant Woods used his sister and a dentist to model the image. One can see the age on the father's face and his willingness to work hard and save the farm. Perhaps he was saving it for his daughter. As the Depression took hold you can see the determination with just a touch of a classy sports jacket thrown over his bibs. It is an interesting clash of age and youth, wealth and poverty, ruggedness with soft flowers in the back, and commitment with a get-to-work attitude.  Grant Woods moved to Cedar Rapids after his father passed away in 1901. He went to an art school in Minne
Post a Comment
Read more
More posts