Showing posts with the label lost art
Show all 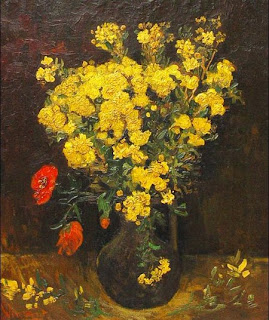 Some of Vincent van Gogh’s works were in sequence with each slightly different from the next, but also very much tied together in theme ( 1 ). As new paints and other tools become improved in the 19 th Century they also reflect differently on canvas. He did not paint what he saw but tried to paint how he felt about the images ( 2 ). This led to some of the most unique paintings in the world. Some of this work comes from the poverty and personality of the painter who sought to recreate a world on canvas. Van Gogh painted flowers on a regular basis. He didn’t have much money to pay models so he would paint inanimate objects instead. It is believed that many of his poppy flower paintings came from images of fields in Southern France. Vincent lived much of his life relatively poor and had to stretch to buy supplies and other items needed to keep his work going.  He states, “ And now for what regards what I myself have been doing, I have lacked money for paying models else I
Post a Comment
Read more

Village Girl with Goat-Lost Art Piece Authorities found long lost art by famous masters such as Pablo Picasso, Pierre-Auguste Renoir, Henri Matisse and Otto Dix in a Munich apartment. It is believed that such works were stolen during the Nazi Era and disappeared into the ashes of history. The total value of the 1,400 pieces seized could easily be over a billion dollars sparking interest from a variety of groups and parties.  Most of the works are well preserved and part of the list called “degenerative art” that the regime felt were not in alignment with local culture. Such art was often either removed or destroyed in an attempt to provide what was seen at the time as a purer culture. Some artists were fined or jailed for breaking cease and desist orders on their painting activities.  When art was seized sometimes it was sold overseas for hundreds of millions of dollars. The regime would hire someone to help sell the art and remove it from the country. It is believed th
Post a Comment
Read more
More posts