Showing posts with the label lion in history
Show all

The Lion Hunt by Emile Vernet-Lecomte 1836 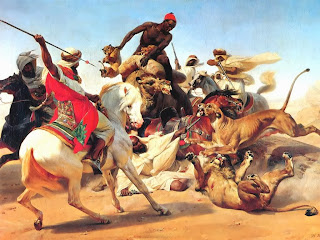 The Lion Hunt-1836 Emile Vernet-Lecomte was born in Louvre and came from a long family history of painters. He traveled with the French army to Algeria and painted many of the scenes he came across.   He traveled back and forth to the region on a number of occasions and continued to complete paintings from Arabs, hunting and military conflict. He was such a strong painter that he eventually became the director at the French Academy of Rome.  In the painting you can see the Arab hunters fighting with the lions. They are using the simple tools of spears, knives and the more advanced rifles to fight. Even though the hunters have the advantages of a horse and camel it should remembered that lions have cunning and mobility that makes them difficult to defeat. One man is on the ground already suffering from their defense. The cubs are being taken for market fetching a high price during this time. The fur is likely to be made into clothing, rugs or other items.  The lion in re
Post a Comment
Read more
More posts