Showing posts with the label history of the pearl
Show all

The Girl with a Pearl Earring by Johannes Vermeers (1665) 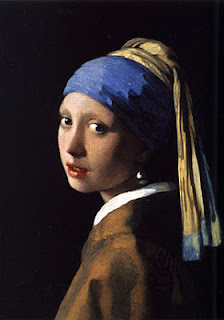 Girl with a Pearl Earring-1653 The Girl with a Pearl Earring is a beautiful Dutch painting by Johannes Vermeers that tells a tale of every girls dream-earings! The painting was originally entitled Girl with a Turban (1665) but was renamed in the second part of the Twentieth Century. It is believed that the painting was of Maria a 13-year old daughter of Vermeer. Others have argued that is was a 16 year old maid Vermeer took a liking to. Some have referred to the picture as the Mona Lisa of the North that represents purity. Vermeer is somewhat of a mystery to the world as no pictures or detailed records can be found. We do know that he was born as a son to an inn keeper and had his earliest experiences serving spirits. He lived most of his life in the Delft which has a population of about 25,000 people. In 1653 he married the wealthy Catharina Bolnes and converted to Catholicism. As the town was predominately Protestant they attended two hidden churches near their home. Due to war
Post a Comment
Read more
More posts