Showing posts with the label historic paintings
Show all 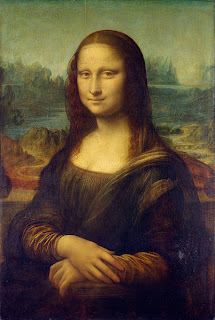 Mona Lisa 1503-1506 Mona Lisa (1503-1506) by Leonardo da Vinci is one of the world’s most famous paintings that have drawn interest for many years from different cultures around the world.   The poise of the painting has created a fascination with people from all lifestyles.   Mona Lisa is seen as perfectly posing in a background of illusion. Together the painting offers a glimpse of a woman who is content in life with a touch of interest in her viewer. The work is seen as a masterpiece of illusion and light. Yet, there might be something more shocking about the Mona Lisa we are not consciously aware of.  The conventional interpretation of painting is believed by some art scholars to be of Lisa Gherardini, the wife of Francesco del Giocondo. Lisa was from the Gherardini family of Florence and her picture commissioned during the Renaissance. In her early life she married a silk merchant who eventually became a local official. They had five children together before he passe
Post a Comment
Read more
More posts