Showing posts with the label france
Show all 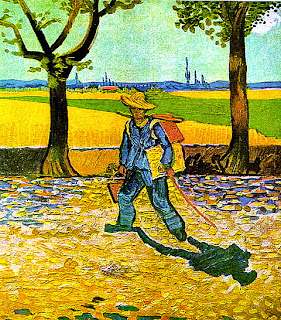 The painting on the Road to Tarascon is a self-portrait of Vincent van Gogh traveling with its artwork in 1888. It was seen as a lost masterpiece and a rare glimpse into van Gogh’s life as an individualist and a traveling painter. To him real painters don’t paint things how they are but they do paint them as they feel they are. Francis Bacon thought it was a haunting painting of van Gogh as an outsider to the world.  Even though the artist is alone, hot, and following a path between Arles and Tarascon he will be meeting his friend Paul Gauguin in less than a month. Within a year of this time he had a seizure and within two years sold his first piece of artwork. With all of his life’s happenings his dark shadow indicates his only true friend is himself.  The Nazi’s removed and destroyed the art as a degenerate for their culture. It was believed, at that time in history, that anyone not part of the overall Germanic bloodlines created art that was insulting to religion, Germ
Post a Comment
Read more 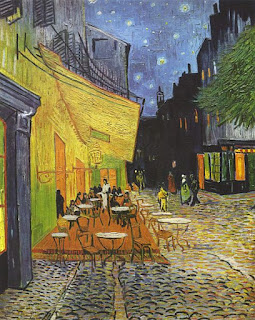 Café Terrace at Night 1888 Café Terrace at Night by Vincent van Gogh was completed in 1888 as a representation of a famous coffee house in Arles France.   The location still exists and is now called Café van Gogh. Within the picture you can find shops as well as the tower of a church that has been converted into the Musée Lapidaire. The painting offers clash of light and dark, yellow and blue, and blue with black. The popular cafe is shown as an inviting and lively display of local socializing and attracted high levels of interest among locals. The history of van Gogh is a little more troubling. Vincent van Gogh had a terrible start in life suffering from all types of personal and public turmoil’s. A son of a preacher he tried being a clerk, preacher, and an art salesman. In each of these instances he failed miserably before landing on painting art himself. He was considered a highly emotional person and lacking in self-confidence.   Even through chronic failure he eventual
Post a Comment
Read more
More posts