Showing posts with the label economic projections
Show all 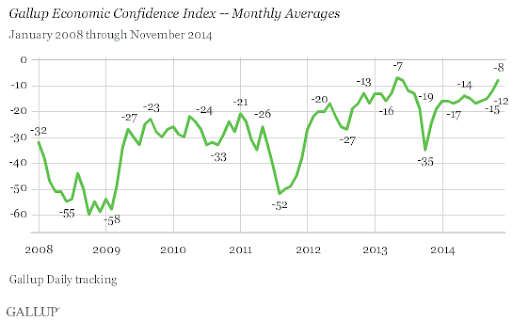 The economies of the world’s nations are on a slow stroll while America has quickened its pace to a leading role as one of the only bright Northern lights for others to follow. Improvement is so significant that GNP has been revised upward from 3.5% to 3.9% ( As cited in CNN Money ). Other nations are increasingly concerned about lower inflation and the potential for deflation. The U.S. is doing so well it may start to raise interest rates in alignment with growth. Americans are becoming increasingly positive about their future prospects within the economy. According to a recent gallop poll consumer confidence rose to -7 which is the highest it has been in 17 months ( Gallop, 2014 ).   The poll is a combination of how people view the economy. According to the poll 24% said the economy is excellent while 30% said it is poor leaving the total balance at -7.  The U.S. economy is also moving forward with some of that growth coming from lower energy and oil costs. Morgan Stan
Post a Comment
Read more
More posts