Showing posts with the label counter parry
Show all 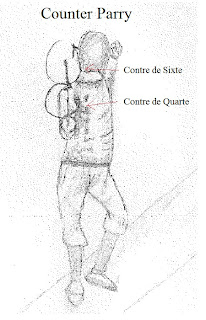 Fencing is a game of skill that is refined within a certain radius of the body. In foil fencing the overall radius is even smaller making the movements more about subtle skill than overpowering your opponent. It is these attacks and counter attacks that make the game interesting to bystanders. Whenever there is an attack there are a number of moves that can be made ranging from moving out of the way to counter attacks. The counter parry is a tactic designed to stop an attack and regain momentum. The counter parry is considered a more advanced move than the standard parry and riposte. The purpose of the counter parry is to remove the opponent’s blade from blocking an attack or to disrupt a negative rhythm in the game. By using a contre de quarte or contre de sixte it is possible to not only remove the blade but also put oneself in the position of an attack.   This occurs when you have removed the opponent’s momentum and then placed it with yourself by controlling the nature of t
Post a Comment
Read more
More posts