Showing posts with the label compensation
Show all

The Benefits of Executive Compensation Metrics

- June 23, 2013
Much has been written about executive pay and there appears to be a natural distrust of rapid growth in compensation during a recessive period of history. Some may argue that executive pay has risen too far in recent decades while others argue that the pay is warranted based upon performance. We can be sure that pay has risen substantially over the past few decades and this is not necessarily a bad thing as long as the performance metrics are accurate and reflective of actual performance. How that performance is measured becomes a key concern. Like employees, executives need motivation and incentives to perform at their optimal level. However, such performance should be based on their actual contribution to the organization versus a quick in and out strategy. Improper metrics can lead to high pay and low performance situations that damage the financial performance of an organization and the employ-ability of those who work for them. Because there is a natural distrust of higher
Post a Comment
Read more 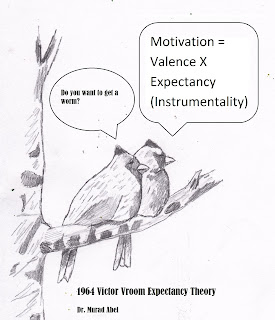 Expectancy Theory postulates that a person will act in a certain way and make particular decisions based upon what they expect the results to be.   Managers that desire to better understand how to motivate employees should explore expectancy theory and its practical use to boost performance. The theory has been used in a number of companies and situations with great success. It is such a popular theory that additional theories have been developed off of its seminal findings. Victor Vroom indicated in his 1968 ground breaking research that motivation can be fostered when employers ensure that rewards are desired and tied directly to performance. His research showed through a number of cases studies and experimental approaches that workers will perform better when rewards are of significant value to employees. When the association of effort and reward is too distant employees may have a hard time making the connection and putting forward effort.  The Theory takes into accou
Post a Comment
Read more
More posts