Showing posts with the label cigar paintings
Show all 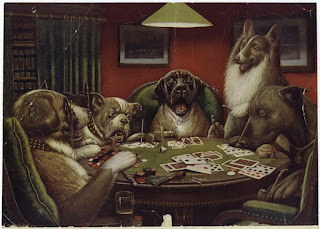 Dogs Playing Poker-1903 Dogs Playing Poker is a painting from the collection of C.M. Coolidge that includes sixteen oil productions. The work was commissioned as part of a cigar advertising campaign for Brown & Bigelow and represents five dogs playing poker and taking on human behavior and actions. Its appeal was based in the uniqueness of its representation of activities that were both manly and social.   The painter C.M. Coolidge was a brainchild for his time. He started the first bank at 27 years old and engaged in rigorous study before putting his hand to the canvas. His wealth allowed him to spend considerable time working on this as well as other artistic endeavors. In 1903, he was contracted by C.M. Coolidge to produce a number of paintings of dogs. He was paid the small fortune of $10,000 for the work on dogs. Over a hundred years later, the painting still holds its value and sold at a New York auction house for $590,000 in 2005 (CNN, 2005). This is an exceptio
Post a Comment
Read more
More posts