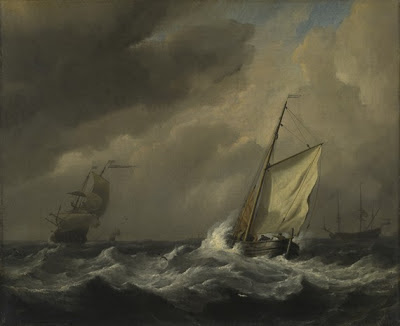 Three Ships in a Gale 1673 Willem van de Velde was a Dutch maritime painter in the 17th Century. His paintings focused primarily on seascape painting which later influenced such English paintings in the next century. His father and brother were also painters which influenced his choice of occupation. He stayed in Amsterdam where an economic collapse sparked a French invasion and the family moved to England. His father found work in the Queen's House at Greenwich working for Charles II. Many of his paintings were about the open seas. "A Gale" was a painting in 1673 of Holland's naval power and trade. It is hosted at the National Gallery in London. Within the picture it is easy to see the waves washing over the fishing-smack and a frigate approaching in the background. The seas represented both ferocity as well as economic opportunities. Many investments were lost and made on the open seas. Such ships were subject to being lost at sea, attacked by other naval powe
Post a Comment
Read more
More posts