Showing posts with the label Virgin of the Rocks
Show all 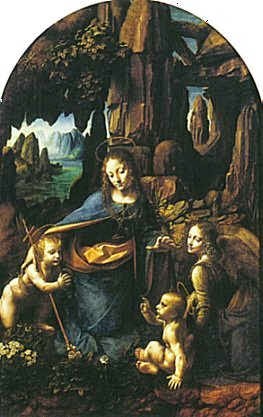 Virgin of the Rocks painted by Leonardo da Vinci depicts the virgin Mary, Jesus, and John the Baptist, and an Angel. There are actually two different pictures painted nearly identical except for some changes in the hands. Even though da Vinci completed most of the work it is believe that his assistants produced some of the musical angels. The angle is believed to be either Angel Gabriel or Angel Uriel. Its story is based on the non-biblical accounts of John the Baptist fawning over Christ on the road from Egypt. According to the legend, when King Herod ordered the Massacre of Innocents the Holy Family fled to Egypt and came across their cousin John the Baptist ( 1 ). Uniquely Leonardo uses darker rocks in the background to highlight the faces of members making them brighter. In the background is a odd set of rocks that are believed to be still in the river Arno near Florence that have nothing to do with the biblical region  (2 ) . The entire picture seems more mystical than real
Post a Comment
Read more
More posts