Showing posts with the label The Fog Warning
Show all

The Fog Warning by Winslow Homer 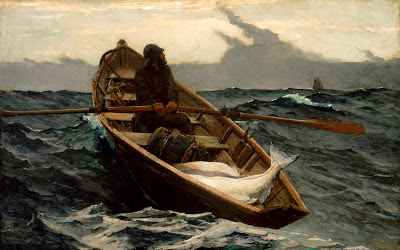 The Fog Warning (1885) In Winslow Homer’s painting The Fog Warning (1885) he paints a halibut fisherman that is racing against the clock of time. As you can tell from the painting he has a large catch for such a small boat. Perhaps he stayed out just a touch too long in his effort to maintain his livelihood. To small fishing boats a few large fish can make a huge difference in the lifestyle they gain. There is a temptation to test the powers of nature in achieving one’s goals. It is a picture that pushes one to see the how connected man is to nature. We can see that there is danger in the painting. The man is on the sea, the winds are pushing him hard, the waves could capsize his weighted ship. We can envision that the clouds are coming and a storm is brewing. The man may have ignored the fog warning and decided to fish just a little longer than was necessary. The goal of the painting is to stimulate nervousness with the fisherman being alone fighting against the elements.
Post a Comment
Read more
More posts