Showing posts with the label Pareto
Show all 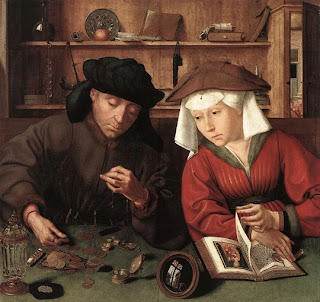 The Moneylender and his Wife - Quentin Matsys (1514) Economics and the process of earning revenue from the system can be a moral imperative that fosters both the growth of the capitalistic system as well as the free market principles theorized by founding masters such as Adam Smith. According to Welfare Theorem only a system that self-regulates and adjusts naturally to market forces can ensure higher levels of needs fulfillment for the vast majority of society. In such a situation society climbs the economic ranks by constant adjustments and readjustments to supply and demand. In the book Economics as a Moral Science Bernard Hodgson states, " since the inauguration of systematic studies in economics by the moral philosopher Adam Smith, philosophers and social scientists have engage in an unflagging controversy regarding the proper method of inquiry to adopt in the construction of economic science " (Hodgson, 2001, pp. 1). Economic science, and any other science, is subj
Post a Comment
Read more
More posts