Showing posts with the label F.A. Hayak
Show all

The Road to Serfdom by F.A. Hayek-Structure vs. Performance 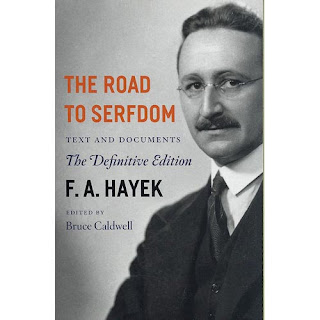 Friedrick August Hayek was an Austrian and later British economist and philosopher. He was awarded the Nobel Memorial Prize in Economic Sciences for his work on a theory of money and economic fluctuations that tied in an analysis of the interdependence of economic, social and institutional phenomena.   He was a lead 20 th century thinker that contributed to economics, systems, neuroscience, jurisprudence and history of ideas. It was these multiple vantage points of seeing the nature of society and its economic system that led to one of his most influential works Road to Serfdom.  In his work the Road to Serfdom he argues the main points that the loss of individualism also means the loss of liberty, oppression, and the eventual serfdom of people. His argument is that as governments centralize their power they also create limitations on people to develop their economic abilities for the betterment of the nation. Even though centralization has good intentions it eventually limi
Post a Comment
Read more
More posts