Showing posts with the label Coronado art teacher
Show all 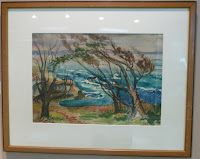 Esther Painting Hagstrom was a local legend in her own right. As a teacher for the Coronado High School from 1939 to 1951 and taught children the meaning and benefit of art within their lives. She also ran the art curriculum for the school district that helped her influence the impressions of many young people. To commemorate her influence the Coronado Library is offering a glimpse into her watercolors, illustrations, and other works.  Esther Hagstrom was a bit of a controversial woman. She was divorced at a time when few women were single or single mothers. In today’s world, being a single parent is a normal process of life and a majority of us will experience it in some way or another. Yet back in the mid 1900’s such lifestyles were certainly considered contrary to normal social expectations.   At this time it was much harder to earn and live in this way. Esther was born in Walla Walla Washington on a wheat ranch owned by her grandparents. She earned a bachelor’s
Post a Comment
Read more
More posts