An American Ship in Distress (1841) by Thomas Birch 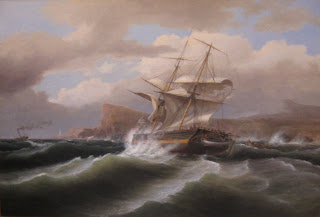 American Ship in Distress (1841) Thomas Birch (1179-1851) was considered one of the first American painters to focus on maritime paintings. He completed a number of great works on the War of 1812 and the shipping industry in general. An American Ship in Distress (1841), was a large work depicting a ship that is in a hazard state after a major storm. The mast, sails and the rigging of the ship were destroyed. You can see a lifeboat being dropped into the water and the approach of two ships to help the crew. At this time the American Navy was almost non-existent and could not lend assistance. Thomas Birch immigrated to American in 1794 with his father William Birch. William made his living as painter and engraver. Both moved to Philadelphia where the family settled. Thomas's works often focused on the cultural advancement and the national economic strength of shipping in the New World. His works were copied by many admirers in the U.S. and Europe. Both John Adams and Thomas Jef
Post a Comment
Read more
More posts