Showing posts with the label 80 years war.
Show all 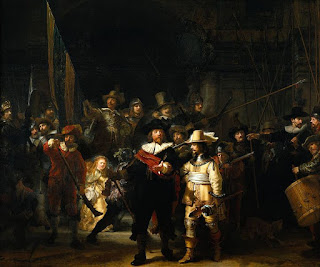 The Night Watch (1642) is one of the most famous paintings by Rembrandt van Rijn. The name is actually incorrect as the painting was inappropriately covered in dark varnish and appears to depict a night scene. However, the varnish was removed in the 1940's giving the total work a brighter image of day time. The painting was originally entitled Patrouille de Nuit by the French and "Night Watch" by Sir Joshua Reynolds. The intent of the painting was to move the subjects into the bright light of the day. Rembrandt was born in Leyden to a miller and the daughter of a baker. His father owned a windmill and people came to use the saying that Rembrandt was "born in a windmill". He was brought into a family of five siblings. His father decided that he should study to be a lawyer but instead he turned to art. He received his earliest training from a relative by the name of Jacob van Swanenburch before moving onto more skilled masters. He finally moved to Amsterdam a
Post a Comment
Read more
More posts