Showing posts with the label Man with a Donkey
Show all

The Painting Man With a Donkey by Horace Moore-Jones 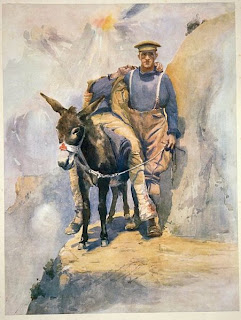 The painting was dedicated to “our hero comrade Murphy (Simpson)”. The work took a number of different names such as “Murphy and his donkey”, “Simpson and his donkey”, “Henderson and his donkey” or “Man with a donkey”. The origins of the painting have been somewhat of a debate among scholars. However, what is known is that the painter was shown a picture of a man carrying wounded soldiers from Shrapnel Gully to Anzac and used this as the basis of his painting.  The object of the painting is John Simpson who was a stretcher bearer with the Austrian-New Zealand Army. John was a deserter of the merchant navy but eventually became part of the army as a way of getting back to England. The day after landing at Gallipoli Peninsula on 25 April 1915 he noticed a wounded comrade. Having experience with donkeys from boyhood work, he loaded his friend on a nearby donkey and brought him to safety. Apparently, John Simpson was a brave fellow who earned a reputation from his military f
Post a Comment
Read more
More posts