China Comes Close to Passing the U.S. in Doctors, Patents and Scientific Discoveries

The U.S. is losing its intellectual advantages when measured against other emerging nations like fast growing China. Intellectual capacity fuels our economy with new products and services and when this declines economic positions change. China's intellectual capacity seems to be racing at breakneck speed to match U.S. superiority in PhD candidates, scientific publications and patents. To retain the nation's current economic position there must be renewed interest in the development of educational and Ph.D programs to push innovation to the forefront of scientific discovery. Patching holes in the brain drain seems more pressing when we compared to intellectual outputs in other nations.

We live in a complex society that insists on increasing amounts of technology and knowledge to manufacture new products.  According to the article Do We Need More Scientists? in National Affairs there was a serge of investment into science in the 1950's when the USSR launched Sputnik, (Teitelbaum, 2003).  In the 1970's and 80's research institutions warned of the consequences of not having enough scientific capacity. The Dot.Com boom of 1990's again saw shortages of U.S. scientific ability widen and we began to recruit heavily from overseas to narrow that gap.

The U.S. is in a difficult era where significant amounts of our manufacturing shifted to cheaper international locations. Compounding the problem further, our schools are wobbly and don't consistently produce the skill levels needed to foster adequate scientific development. Attracting investment in manufacturing and development rests in part on our ability to develop useful intellectual capacity.

To more clearly discern if we have enough intellectual capital we can look at a couple of markers that include the hiring of doctors from overseas, Ph.D. graduates, scientific publications and patents.

Intellectual capital and our ability to general new ideas has always been central to innovation. New ideas are build from study and research that converts into knowledge of the past and ideas on how to solve problems for the future. The U.S. imports intellectual capital through a visa program based business skill needs. H1-B visas, while not always Ph.D. levels, do provide an indication of need for further scientific and technology oriented skills.

According to the Pew Research Center, since 2009 the demand for H-1B Visas have skyrocketed and meet quotas within the first weeks of application dates (Ruiz, 2017). From 2000 to 2018 the U.S. saw business submit work visa applications increase from around 110,000 to 200,000 respectively. Approximately 90% of applications are from the STEM related fields such as computer, math, science, engineering, etc...  Of these applicants 5% are Ph.Ds and 4% are Master Degree holders.

Work visas are a strong indicator that we have such a high demand for certain types of skill and knowledge that we import it.  While many of these recruits have something of value to provide our country they should be used more as a cushion between increased demand and lack of supply. Chronic short-falls in talent should concern stakeholders of industry-education misalignment.

When we compare Ph.D graduates of the two countries over a given time-frame we can gain a deeper insight into the nature of the problem. China has a large population of relatively uneducated low-skilled workers. They have increased their PhD. institutions. We can see this change in comparing graduated during a certain time frame. The U.S. graduated 47K Ph.D students in 1998 and 67k in 2014 (OECD, 2016)  China over the same time frame  graduated 7.5 K in 1998 and 53K in 2014 (Mei, 2018). 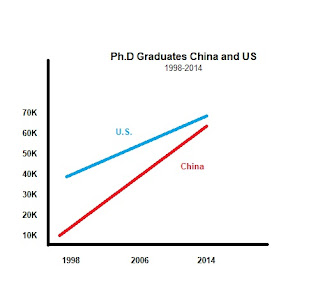 Another way to look at growing innovation is through the eyes of scientific publications. Doctors often publish much more than any other educational group and indicates the presence of scientific activity. Reviewing publications will tell you a lot about which countries are creating and developing some of the most thought provoking advancements. It is those advancements that make the biggest difference. 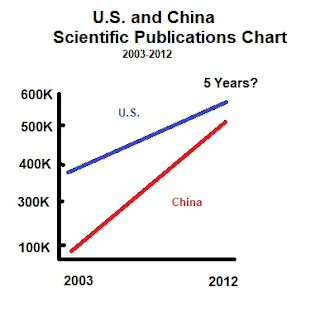 Patents help gauge improvement in the protection of intellectual discoveries and innovative products. They often include new products, additions, technologies, and discoveries. In 2014 The U.S. had 615,243 patent submissions and out of these 326,032 patents were granted as original (U.S. Patent and Trade Office, 2016). Comparatively, China in 2014 submitted a whopping 964,859 patent applications and was awarded 246,895 patent grants (WIPO, 2019). 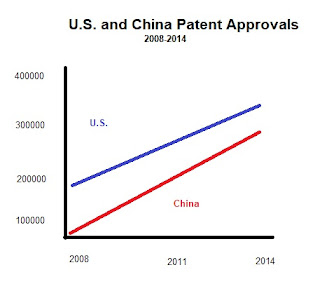 How can we Improve U.S. Intellectual Capital?

1. Rethink Education. Education is vital to today's success as an individual and as a nation. We are not graduating enough people with STEM skills and must rely on importing that talent from overseas. The need to use education to prepare Industrial Era factory talent has been replaced by Big Data Era demand for higher order thinking skills. Our schools will need to set the preparation work in the early stages of life and foster them throughout people's lives.

2. Cultural Adjustments. We should think of science as an essential aspect of our lives. Move scientific thinking from the periphery of learning to its center. Exposure brings awareness of the influence of science to the general public. When people are exposed to science in popular media, formal education and within their daily lives more critical ways of viewing the world occur.

3. Adjust the Labor Market and Incentives. Most students don't like math, logic, and all the different components that make their way into fields of science. While we may not be able to control how people feel we can better ensure that those with science degrees can find jobs. Companies that import new talent through the H1-B visa programs should first consider American talent before engaging in international recruitment.