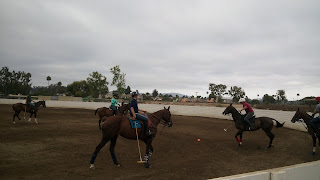 Polo is the game of kings and attracts all types of different people. Most will never touch a mallet or be on a horse. Ever since the movie Pretty Woman people have flocked to polo for opening day never to be heard from again! Now, it is completely acceptable to love polo and never play the game but I do want to bring up the idea of "poser" and the difference between loving the game and pretending to be a master at it!

I once went to a polo game with a few friends. It was fun. We talked about how beautiful the horses were and most of us enjoyed our time. However, there was one gentleman that was bragging about how he loved the sport, engaged in it all the time, and dressed so perfectly to the game you would think he was a wealthy sponsor for it.

That is all ok because people have the right to do what they want and wear what they want. Poor taste and false impressions are not yet illegal. The clothing was a touch too perfect and seemed to be put together all for impression. Little Polo Association shirt, colored pants, and the perfect shoes with no socks. Just out of the Pretty Woman movie!

Still no problem! Where there was a problem was his condescending attitude to others who didn't understand the sport. If they asked him a question he would sneer a little as though he had more knowledge and give them simple answer. Yes, he would respond with delight, "They hit those mallets". Asking about a little more detail would result in a quick distraction with no real answer. He delighted in being "Mr. Polo" for the day. Unfortunately, his answers were wrong and not well informed.

Posing is when you try and look the part and don't really live that lifestyle. It is all for impression and show. It indicates that the person hasn't developed a deeper sense of self and needs this outward appearances to find value. It is a lack of genuineness that will filter throughout their thinking and relationships making them untrustworthy. ....and yes the same person has been accused of selfishness in other areas of his life.

I suppose it didn't help much when I indicated that most polo players don't look like the "once a year" fans. Pointing to the polo player's families and their wearing of jeans and t shirts just beyond the wall next to the horse trailers didn't go over well with this group. Commenting, "those are the fans who come to play day after day because they love the sport and they look nothing like us."

Well...I decided not to be a poser and joined up for a polo class. I love horses, I love competition, and I love the outdoors. Because I already knew how to ride a horse I was offered to play some amateur matches after my first class. They must make sure you won't fall off your pony. Graciously I accepted and scored 4 goals in my first match! The fundamentals of the game will take longer to learn but certainly it was fun. For me I would rather play the sport than shop for the clothing.