Swimming with Sharks in Key Caulker 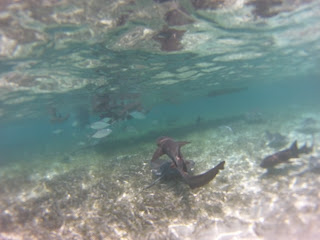 Sharks of Belize are considered nurse sharks and generally not dangerous. They reside on the world's second largest protected barrier reef and is approximately 125 miles long. If the boat drivers feed the sharks you can actually swim very close and watch them swarm the fish as they compete for food.

You will be amazed about how these sharks move in a swirl and seem to coordinate their activities as though they are used to hunting in a pack. They can hover a few inches off of the ocean by the use of their pectoral fin.