Coyote or Wolf in the Upper Peninsula of Michigan 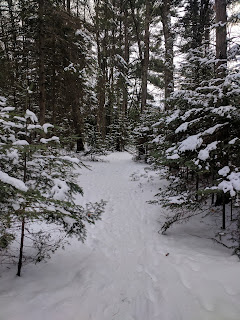 My son and I are out on a hunt hoping to shoot some deer before the season ends. As we walk through the woods we scare out a pack of deer. They run straight across our nose and into the frozen swamp. We take our take and try and stalk them out with slow movements and lots of patience. They have much better hearing than us and any sudden movements will scare them off.

However, we did come across the remnants of a recent wolf or coyote attack on deer. Just not sure where it came from or what type of animal? Nearly complete eaten carcass, including the bones, full grown deer and lots of tracks and fuss in the snow. So I took a better look at the tracks to determine the time and potential type of attack. 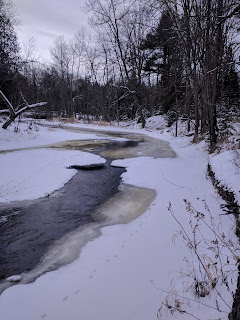 -The tracks were slightly smaller than a wolf-A good sign it was a coyote.

-About 5-6 animals were involved in the attack-Could be either but lends more to wolf unless it is a large prey.

-Attack was over the past 24 hours as we had some snow which would have covered those tracks.

It was likely a coyote attack while wolves are in the area they seem to have more fear of people and this was off of a walking trail that has been used at least a couple of times after the last snow fall a day or so earlier. The size of the prints are not huge so it was a smaller animal that seemed to have moved as a pack. I also noticed that the animals came in from different angles in a well coordinated prey hunt.

The Upper Peninsula of Michigan has some of the best wildlife in the country. Deer, bear, black panther, wolves, coyote, fox, rabbits and a whole host of other stuff lives abundantly in the area. Never had an issue with any of them and on my hunts I have only come across a few unless I was looking for them. There is a growing eco tourism industry.