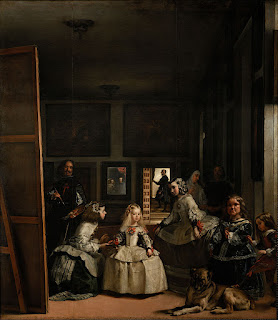 Few works of art allow for a deeper perception from a king's point of view other than Las Meninas. Las Meninas, or Ladies in Waiting, was painted in 1656 by Diego Velázquez of Infanta Margaret Theresa and her staff. Margaret was the future Holy Roman Empress and last of the Spanish Habsburgs. The painting was completed from the perspective of King Phillip IV of Spain in the Royal Alcazar of Madrid.

What is most important is this picture is that it is one of the first times you can see the world from a king's perspective. He is looking at the room as though he is walking by or checking in on his family. Margaret Theresa is being taken care of by her servants and there appears to be a bustle going on. It "snap shots" the activity for the audience to see.

Some have argued that it is the first "photo bomb" in the world. You can see the painter Diego in the painting. He created a picture of himself and immortalized it from the perspective of the king. Pretty tricky to put oneself into history that way.

Painting like these capture a time before the modern era when royalty and extreme power and wealth were held to a few. The empire stretched across large parts of the globe making this picture a capture of extreme decadence before decline. Despite its height of existence, there still seems to be a family orientation to the picture where father is looking in on daughter.