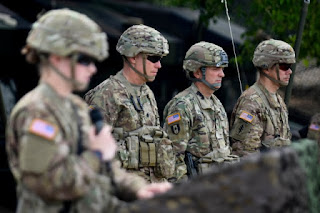 Leadership is the ultimate group management technique that attracts followers and provides direction to achieve communal goals. Groups without leaders are like mobs that have little purpose other than to simply co-exist and chaotically chase random interests. In the military, leadership is a necessary driver of group performance toward defense objectives. Poor leadership means poor military performance and significant risks to safety and security as appropriate personnel direction is not maximized. Knowing who has the capacity for leadership and who doesn't, can save the military substantial selection and training costs.

Because of the high stakes of selecting proper leaders significant research into personality and its influence on leadership skills has been conducted. It makes sense, in this case, to reduce risks, and avoid those who may not have the intellectual, emotional, or ethical ability to take on leadership positions. To separate of the wheat from the chaff is not a perfect science and newer methods and models are constantly being created.

One of the ways officers are training is through special schools designed to move enlisted members to high performing leadership positions. The Army's Officer Candidate School (OCS) is designed to take high quality military members and bring them to the officer standards so they can compete in a modern military setting.

There are factors that set one candidate apart from another. Potential officers should have a motivation to lead, have self-efficacy, commitment to the military life, high cognitive abilities and a strong personality. When candidates rank high on all of them it is expected that they will perform well in training and move on in their military careers as officers.

Of the 1,200+ officer candidates the researchers found that personality, partially mediated by the desire to become leaders and their belief in becoming leaders, was a crucial factor in those that will be successful in leadership training programs. Those who believed in their abilities were rated higher by their peers and superiors within the program.

This tells us that the simple desire and belief in one's ability makes a big difference in whether someone can actually become an officer. Physically and intellectually all of the officer recruits might be in the same range but the simple belief in one's ability sets them apart. This study can help us understand how belief and self-efficacy are not in the domain of military leadership alone but could be applied to higher education graduation rates, employment success, and entrepreneurship.