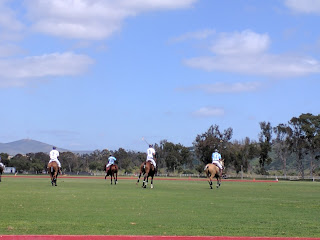 Opening day of Polo in Del Mar brought a festive spirit with Sunday Chukkers and cocktail sipping under the California sun. The ponies sprinted down the field and seasoned players continued to make goals with their mallets. Long drives and defensive moves were well played throughout the match. As masters of the game the the ability to hit the ball at nearly full speed shows the amount of practice these players engage in.

The event drew a large crowed that came "donned" in their finest summer dresses and leisure suits. Sipping on the well kept grass and engaging in conversation the event offered food, drink, and plenty of socializing.

On this particular meeting we didn't make our way into the VIP section but went and sat by many of the polo families down on the other side. Spread our blankets, grabbed our favorite beverage and watched the game. Perhaps it was one of the best locations being next to the field and constant visits by the players who's families were sitting next to us. 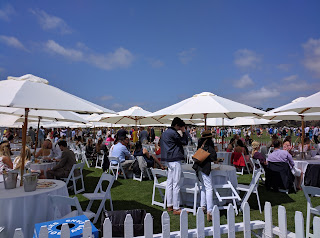 Polo within the San Diego area is making its way back into a popular sport. The Argentinian team did a magnificent job moving the ball and coordinating their efforts. They were able to gain a solid with over the American team ending in 6-2.

Polo has a long history and started in Persia somewhere around the 6th Century and passed to Asia and Europe. English officers brought it to their home country and it eventually spread to the U.S. New York saw its first polo game around 1860. It made its way to Coronado among military officers and steadily grew a crowd. The sport is played in 12 countries and is seen as a refined activity due to the inherent cost of the game.