On the Path to Ultra Nationalism 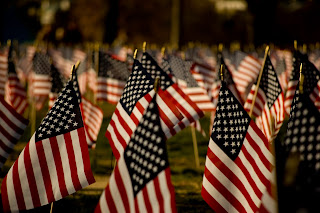 Americans are struggling with some fears about the global economy and their place within it. Some have been displaced and many others have struggled to make financial headway. Most are living pay-check to pay-check with little respite. As the U.S. comes to grip with the rise of China and Asia it will need to consider some serious paths and consequences going forward.

The people, and their representatives, will choose between greater global interaction or the charm of protectionism economics. One embraces the world and encourages the country to become more competitive while the other partially disengages somewhat from the international community and seeks to create protected industries that employ Americans.

There is nothing inherently wrong with either approach but one leads to a better long-term outcome than another. There is nothing more or less patriotic in one approach over another regardless of the feelings associated with protectionism. Patriotism is that which is best for one's nation and most importantly its people!

Research has shown that countries that engage in isolation and protectionism become weaker over time. They cannot hedge their best capacity and resources to create value. Their approach is to artificially produce everything with heavy government subsidies that no system can sustain without complete economic control.

While all businesses should be given an opportunity to enter the market they should do so based on their capacity so they can grow large and strong on their natural abilities. Creating the right environment for business growth impacts all industries in a positive way without making government shoulder the impossible burden.

For example, protecting some American businesses long enough to get them competitive can be beneficial and China has done this successfully on a number of occasions. However, continuing to protect them beyond their seedling stages from competition leaves these industries weaker and noncompetitive. Protectionist policies only work so long before it hinders growth as the companies fail to adapt to challenges.

If you can't adapt you cant grow!

No doubt America should be a little more selfish with its policies but it should continue to engage and collaborate with the rest of the world. Those nations that are most likely to be successful will create competitive economic environments that draw international investment and resources that spur new innovations and business. Over the years and decades isolationism will cause more problems than it will solve while fixing our government policies will encourage growth and jobs.