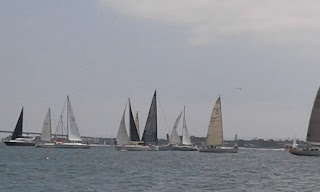 The 2016 Sharp HospiceCare Regatta came to an end with fine weather, brews, and BBQ as the winners were called. While our team, Minx didn't place, we used the time as a learning experience that will better suit us the next race. With practice and coordination we improve our times.

The HospiceCare Ragatta was a pursuit race meaning that boats start at different times which gets rid of the starting clutter and limits the chances of accidents and sharing gel-coat with another vessel. The fastest ships wins based on speed.

This was my first competitive race so I did my best, stayed calm and focused on my job. There is a lot of chaos that goes on during the race and if you stay focused on your job and avoid getting confused by other commands that don't pertain to you.

Our time wasn't as strong as hoped based on a couple of  factors such as trying to maneuver around a wayward vessel at the start line causing a 23 second delay. In addition, we tried to use a spinnaker sock which got tangled and had to come down to untwist.

Next race I will focus more on understanding my role in the vessel and its connections to other roles. Focus more on how the different positions and personalities rely on each other and create greater responsiveness to the race itself.

The following information was taken from Cortez Racing Association