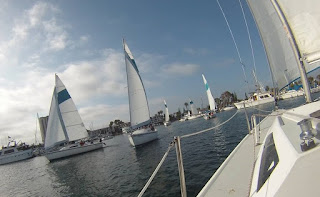 Sailing is an excellent skill that keeps you focused and in the moment. It is also a great sport to teach teamwork skills. Crews are often 3 to 4 people and include 2 for the job, one for the main and the skipper. Each has their own job and the ship sails at its best when all members are working together. With practice the team will get into a groove and understand how their part impacts the rest.

When tacking the ship will swing into the wind in an attempt to change its course of direction. It moves across an area called the dead zone where the sails can pick up no wind. It it stays too long in that area the ship will eventually come to a stop. It is imperative to get the ship across the dead zone and optimized on the other side as quickly as possible.

The skipper will often yell, "ready to jive" and the crew will respond "ready" and then the skipper gives the command "jive ho". Within seconds one member is releasing the jib line, on the other side the other brings in their jib line, the person on main sail seeks to optimize wind coverage by adjusting direction. As a team works together it gets faster and the ship becomes more optimized.

Consider that over the past few races I have been with different crews and we seem to come in last. However, when working with the same crew a few times the ship speeds up and we come in at a higher ranking. At one point we ran neck and neck for first place based on the practice and skill of the members.

As an exercise it can be helpful to put executives through a course on sailing in a way that forces them to work together. They will eventually come to understand that without all people talking and working together the ship won't be at its best. The same can be said for organizations when executives work in silos, don't communicate, and the entire organization suffers.