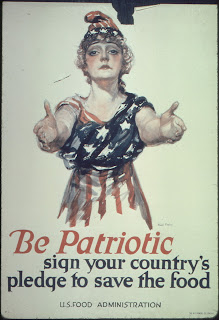 Our service members have risked their lives to keep our freedoms secure. They are a blessing to the nation and set an example to ourselves. Patriotism can come in many forms and range from the smallest act to that which transforms our lives. Any American can engage in patriotic acts that further the cause of their great nation without being in the Service.

The first criteria for patriotism is that it is an act done for the benefit of one's nation. This means it is done so that society can receive a benefit. There are people everyday who do patriotic things for sheer moral value of doing so. For example, police officers who do a kind act and protect someone are engaged in one form of patriotism.

Patriotism doesn't only mean the use of force. Those who protect the civil rights of people also engage in acts of patriotism that pressures the larger system to become better and change in a way that supports the cause of the  nation. Acts that help make society a better place are patriotic acts that have practical utility.

The feelings associated with patriotism are deep and are often tied to our language, culture, and belief systems. There are many different viewpoints of what America is, who is an American, and where America should go. People are actively engaged in that debate and are contributing to a definition that is workable for a nation as diverse as ours.

Acts of patriotism could be the cleaning of a park, helping a neighbor, speaking out about abuses, and even reporting a crime. There are some who have devoted their lives to patriotic acts that help society but have not asked for anything or received any positive encouragement. As you celebrate independence remember those who stood for something greater than themselves.