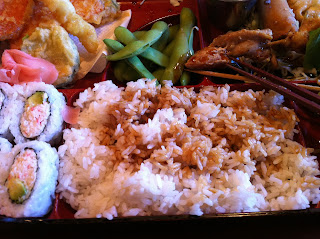 Advertising is a contract where each person who hears the message makes a choice to frequent a business or not. They weigh and balance their time, effort and money to come to a conclusion. This is the customers investment. When the customer puts forward effort the advertisement becomes a social contract where individual customers expect to receive what was offered.


When this doesn’t happen the perception of the business declines. Recently I found a Saturday happy hour sushi special online. It was a good deal with $2 seaweed salad and $3 California or Spicy Tuna Roll. I made the decision that this is where I would like to catch a quick bit after an event.


Unfortunately, when our group arrived the waiter stated that they hadn’t updated their advertisement. Because this was the reason why we came to the restaurant I requested that he talk to the manager to see if he would honor the deal. With a sheepish grin he came back he admitted they made a mistake but would not honor the advertisement.


People make mistakes and fail to update advertisements but when the customer gets attracted to a printed deal they are doing exactly what the business wants. When the business then doesn’t honor the printed deal it looks like false advertising. Customers can be quickly turned off.


Whether or legal or illegal is not the point. The issue is gaining customers. For a Saturday it appeared to be empty. A review of Yelp found that customers ranked the restaurant low and it appears they changed their name in the past few years but may have kept the same management. Their failure to honor the commitment not only is turning away customers but also appears to be part of a broader matrix of poor decision-making.