Biking is something we did when we were young and then we threw that bike the minute we got a car. From that point on we may have biked a few times a year for fun. If you were an outdoor enthusiast you might have biked the trails on a regular basis.

In some places bikes are not that popular. For example, a bike crowd always existed around universities in Michigan and some of the recreational areas but not much elseware. Places like Detroit are making biking popular again.

States like California have year round biking; depending on where you live.  They also have more designated bike trails making the use of bikes more practical. A culture of biking emerges.

The difference between the two places is that biking in one area is mostly recreational because of the seasons while the other area it is both recreational and a practical form of transportation. It is augmented by strong public transportation, ride share, bike lanes and small stores. 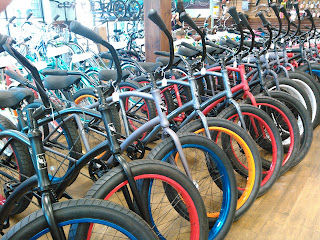