Philosophy 101 provides a broad snap shot of the major philosophical thoughts since ancient times. The book is easy to read and simplifies the theories and ideas for layman philosophers to see the depth and scope of thought in human society. It is this human thought that has pushed society to newer levels of thinking that keep humanity moving forward to new heights.

Philosophy is considered a cultured persons hobby, a poor man’s occupation, and trivia entertainment to the masses. We fail to see that philosophy is the root foundation of science and the two cannot be unmarried. Skilled philosophers use multiple avenues to understand a problem and regularly are running against the grain of current thought.

Despite the natural desire to arrest new thoughts in society it is the philosophers that society owes its greatest consideration. Whether we are discussing scientific principle or the very constitution of the country none of it would have been possible unless philosophical minds pondered the possibilities.

I selected one theory, one philosophical point, and a logical-sequential function to highlight the point. The Theory of Universals tells us that everything in the universe has some type of order through connecting universals, the Philosophy of Cultures shows us that understanding our world is subjective based upon rearing, and the Scientific Method guides us in a methodology of testing our environment.

The Theory of Universals:

The Theory of Universals states that there are universals in our world outside of mind and language. Plato believed that there were properties and qualities that can characterize our world. Some believe in forms that exist outside space and time while others believe they exist within our space and time. The example provided are the redness of a cherry and apple and how these exist regardless of whether or not someone perceives them.

If we were to look at science and properties we can find that there are universals in terms of elements that exist and function regardless of whether or not we perceive them. As technology increases we are able to perceive universals in their more minute form and change how we define them in our minds but don’t necessary change the fundamental nature of existence. It exists whether or not we are aware of it.

The Philosophy of Culture:

Culture in the past was seen differently than it is today. Culture was part of the rearing process and created a way of understanding the world. It fundamentally changed how we view the world and how we see particular issues. Culture is embedded in our language and mental images derived from language.

Culture is seen as collective or individualistic. In collective societies people see their duties to their social networks while in individualistic societies people feel that their duties lie primarily with themselves. Ethics and values can be culturally relative depending on the values one is reared with. Some have argued that both types of cultural vantage points can still judge right and wrong based upon helpful and unhelpful behaviors. 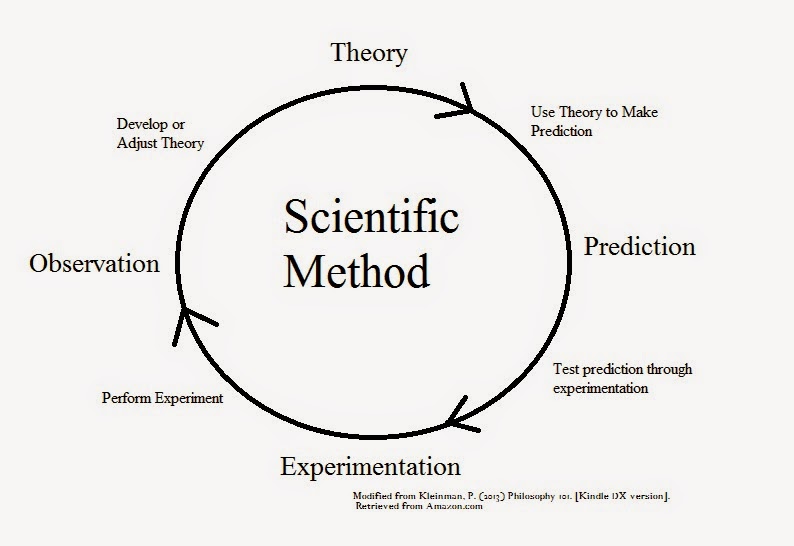 The enlightenment changes the way in which we view the world as philosophers sought to find truth in the universe. It had a profound impact on perceptions of society, government, nature, the universe, and rational thought. It changed the mystical views of the past to the scientific method we use today.

The scientific method provided a frame work for reason and logic to analyze the world around us. The circular model is based on observation, theory development, prediction, and experimentation. As new observations and predictions occur new theories develop and existing ones are adjusted to make them more accurate.

Email ThisBlogThis!Share to TwitterShare to FacebookShare to Pinterest
Labels: book review, higher education, Philosophy 101, Scientific Method, The Enlightenment, The Philosophy of Culture, The Theory of Universals